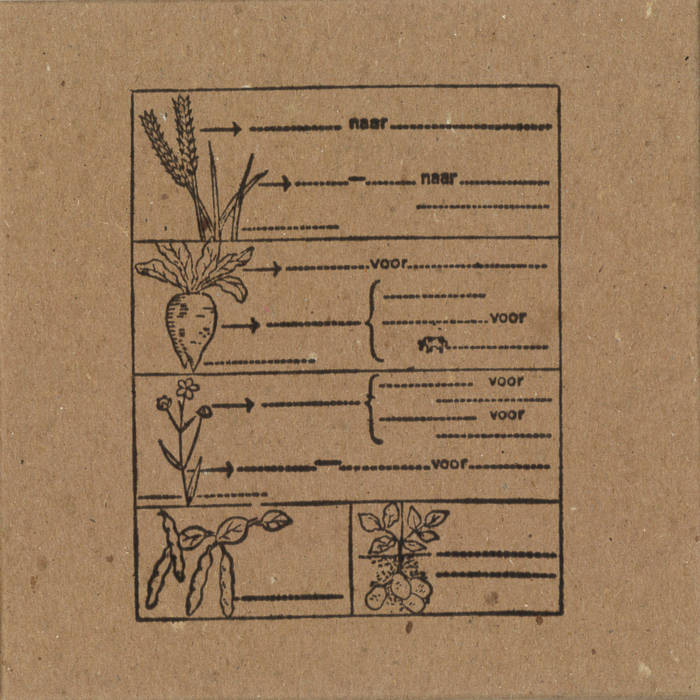 Frans de Waard, Vital Weekly:
Here we have three lengthy pieces, fifty-four minutes in total, of some great music. They cover the entire dynamic spectrum, with lengthy passages being all loud and brutal, but also going all quiet, and all of this in a very fine collage-like approach, cutting in and out of the mix, going from zero to one hundred, as it were. There is some excellent beauty in this brutal work; brutal but not necessarily very noisy, I would say. It makes you start listening differently to the world around you, I guess (maybe providing you never heard this kind of stuff of course); at one point
I thought my disc was slipping in the machine, but it turned out this was part of the bigger picture. Lovely stuff, beautiful poetics of the ordinary world in a new context.

Ed Pinsent, The Sound Projector:
Latest item from Tim Olive is another duo collaboration, a set-up he evidently feels happy with (as opposed to playing in a large group, I mean). This time he’s doing it with Jin Sangtae, the Korean genius who’s a great mover and shaker when it comes to getting concert events going as well as being a far-out improviser who creates music using marginal means. I don’t have enough Sangtae records knocking about here in my cage-like hovel. He guested on that Foreign Correspondents set, which I read as a kind of “survey” of the Far East conducted by Europeans, but the defining record for me still remains the mini CD Sacrifice 2, which he made using car horns. Hooty! Hooty! Of course that project was also pulled into the orbit of Nick Hoffman, and added to his defining aesthetic and agenda of what he thinks music is. Hoffman is a fellow known to both Olive and Sangtae I feel confident in saying, and I suspect all of them are taking part in a long-standing conspiracy to undermine music as we know it.
Back to today’s disk. It’s a confusing record. Long stretches of silence, or not much happening aurally, are contrasted with other long moments where insufferable, ear-splitting and nasty noise emerges, though not to be confused with table-noise. The painful aspect just comes from the harshness and unnatural surface of its tone, not from any sense of aggression or violence. In fact our lovely pair of electronics-nerds wouldn’t harm a fly, I suspect. There is something so endearing about the way they present these strange buzzes and shocking eclats as if it was the most ordinary thing in the world. If there are any imaginary brackets framing this as “art” or “culture”, perhaps we’re being invited to ignore them for the time being. naar/voor (845 AUDIO 845-7) is I think mostly an electronic record…well, sort of…at one time I would have thought of Tim Olive as being something resembling a free-improv guitarist, but those days are long gone. It was made using “cast-off computer hard drives as sound sources” (Sangtae) and “magnetic pickups to give voice to consumer / post-consumer objects” (Olive). Hard to visualise these actions when called on to do so. I suppose you could attach contact mics or crocodile clips to a hard drive and just watch the music leap forth. I would just end up with burnt fingertips. As to the magnetic pickup half of the act, Olive has been paring down his approach to music in this direction for some years now. I guess they act as mini-microphones. After all that’s what humbucking pickups used to do on my old Kay guitar.
I have no idea what a “post-consumer object” may be. But it may simply be something which the original purchaser has finished with, such as a cracked mug or a broken PC printer. Junk, in other words. This may tie in to the “recycle and repurpose” motto which leads off the press sheet and presumably served as the guiding mission statement for this musical production. Even the cover is made of recycled chipboard, and a “repurposed” rubber stamp has been used for the cover image in a form of DIY letterpress. The image seems to be something to do with cottage gardening, crop rotation, or showing how plants and vegetables have an important part to play in farming workflows.

Mark Wharton, Idwal Fisher:
On naar/voor Sangtae’s hard drives explode like distant stars, their countless shattering fragments dissolving like crackling R Whites fizz. It’s not all out war by any means, though: Olive compliments with his magnetic pickup/Heath Robinson string neck filling out the sound and making this a win/win collaboration. Track one begins in such a way then descends in to near silence, the only sounds audible being monitor buzz and the muffled chatter of information channels before the flickering emergence of shortwave radio stations. The second track rattles like a broken washing machine giving you the opportunity to hear Sangtee’s broken hard drives close up and while it never reaches the extremes of his solo work [what I’ve seen and heard at any rate] the sounds are intense in their own way with enough space and clarity for eager listeners to pick out every tiny detail. Which is pretty much how the last track goes too, a fluttering glitch ridden ride where digital meets analogue, the crunching of ones and zeros, whoops and spirals, high hertz sparkle that disappears into emptiness.