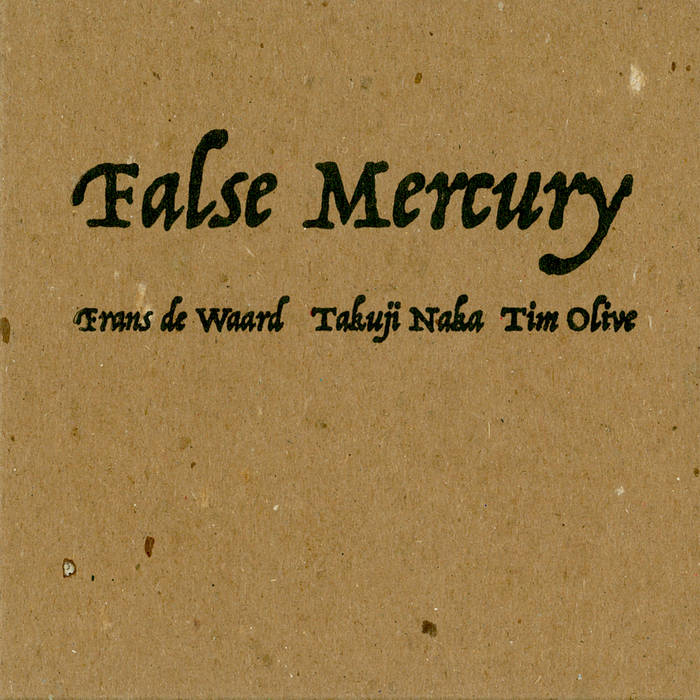 Edging the Aftertimes A soundtrack for standing at the bathroom mirror seeing life marked on your face and hands, watching memories burning behind you. Deep inside your eyes, see your lasers pointing ever forward, and when the beams connect you will know your future.

Peter Johan Nijland, Vital Weekly:
The album kicks off with a wobbly but rhythmic lofi piano loop followed by a dense drone that consists of some kind of modulated static. Still, nothing too punishing and like a lot of the bits that follow, these are mere snapshots of different atmospheres. At several points undulating streams of noise and electro-acoustic plucking and electric humming create a field of aleatoric randomness that sounds well balanced, while at the same time remaining unpredictable. The overall sound is very saturated and raw which gives the album a pleasant vintage veneer. Slowly the coercive sound movements steer us through a mechanical landscape of steam-punk machinery, ranging from tiny pocket watches to massive, city-powering generators, each with their own grating voice and repetitive rattling defects. Sometimes we stumble upon the lingering ghost of musicality that stands midway between accidental radio test frequencies and the arbitrary spasms of a wonky 78 rpm record player, but it rapidly trails off again before the haunting becomes real. Throughout the album there is a strange sensation of spatiality. Not due to the use of any effects - it rather seems like the whole thing was recorded without the use of an sound mangling tools, save a sparse filter here and there - but because of the extreme and extensive focus on some of the sounds, that in a less minimalistic composition would have gone completely unnoticed. All of it is very direct and honest - owing to the obvious minimalism it seems that despite the aforementioned mixing, most of what we hear is actually that what was recorded during the session at Extrapool. Although some of the sounds are somewhat intense, especially on headphones, nowhere does it become too abrasive or harsh, which really is a good thing with these kinds of records. To me at least, since i severely dislike having to reach for the volume dial every other second. The album ends with a piece (if you don't count the one single track that this album basically consists of as one piece) that seems to allow a tiny bit of high end cluster sounds to enter into the mix, which provides an interesting spectral change next to the reintroduction of aleatoric elements similar to the ones that featured at the beginning of the album. The whole thing lasts just over 30 minutes, which is a good length for this kind of stuff. A very uniform and aesthetically solid piece of work.

Mark Wharton, Idwal Fisher:
False Mercury finds de Waard, Naka and Olive in a basement in Nijmegen making sounds with modified cassette players, contact mics, magnetic pickups, lo-fi electronics, hand made string instruments ... hours worth of recordings. This release being the distilled result of those hours mixed and polished for our edification and described in the press release as ‘a single 31 minute dose of subterranean cough syrup-vibe goodness’.
Being partial to a bit of capstan rub and syrup-vibe goodness all went well for the thirty one minutes. After a quiet opening the threat of noise lingered in the background like an approaching storm only to subside and be replaced by the gentle whirr of those modified cassette player motors and electronic hum. From the video evidence I’ve seen it’s Olive with the hum courtesy of a hand made Heath Robinson like guitar which he threatens but does not touch with vibrating tuning forks and magnets.

False Mercury was recorded in May 2016 in Nijmegen, while Takuji Naka and Tim Olive were on tour in Europe. The day after a duo performance at Extrapool, they met with Frans de Waard in a studio in the basement of the venue for several hours of subsurface recording, using modified cassette players, contact microphones, magnetic pickups, hand-made string and wind instruments, spring reverbs, and lo-tech electronics, while in the city above, unheard but perhaps sensed, a stage of the Giro d’Italia (in the Netherlands…) wound its way through the streets and a Queen cover band celebrated in the square. All of this was taken back to Japan, mixed, minimally edited, and is now available on 845 Audio, in a hand-stamped recycled chipboard sleeve. Multiple hours of recording have been lovingly distilled into a single 31-minute dose of subterranean cough syrup-vibe goodness.