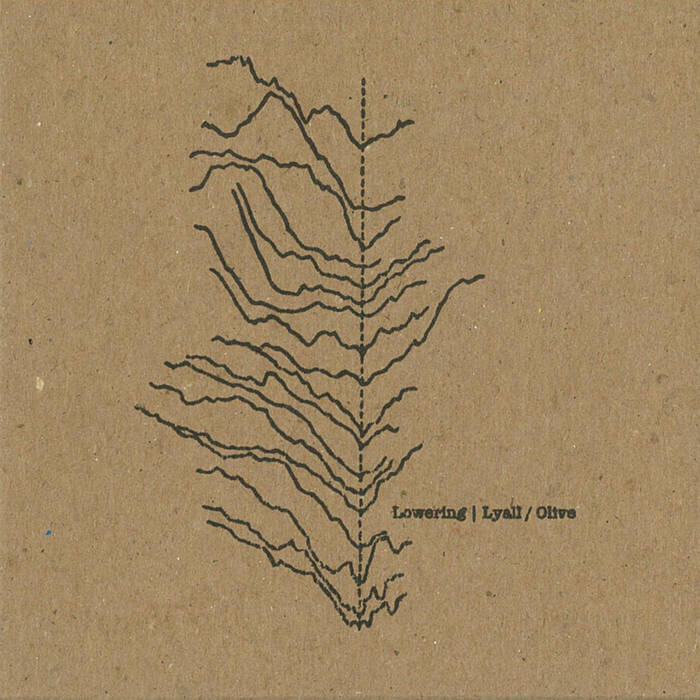 Raymond Cummings, The Wire:
…a sometimes choppy yet largely simmering transmission beamed in from another world - soupy, messy, comforting. A sparse, blurry drone that might be pure, ethereal atmosphere serves as the backdrop for irregular blurts of car engine choking, metallic clatter, tonal lowing and intermittent sci-fi echo. Industrious yet never overwhelming, Lowering emerges as an almost meditative experience: a loose net of willful miniature accidents to drape over whatever confrontational silences abound in the world beyond a pair of headphones.

Brian Olewnick, Just Outside:
I think I'd only heard Lyall a tiny bit on one of those Improvised Music from Japan collections a long while back. Here, he's credited with hydrophone and electronics and the resulting collaboration, while just as aggressive as (Brother of Divinity), does seem to contain a more liquid aspect, a friction-filled, granular flow, viscous. There's a great grind in play during the first half of the piece, though the interplay grows somewhat disjointed later on, even somewhat spacey. By the work's end, it's evolved into a wonderful, rich, swampy stew, entirely immersive. More fine work.

Michael Rosenstein, Dusted Magazine:
From the onset, the 27-minute Lowering bursts forth with low-end agitated shudders and quick-fire spatters and scrapes and takes off from there. The two build densities and shifting layers plying bass-heavy rumbles, abraded tumults and shards of feedback in to a surging whole. Concentrated murmurs of crunching timbres provide a foundation of tectonic shifts against which the Olive and Lyall place gestural tracers of scuffs, creaks, percussive attacks, resonant reverberations and cavernous pings. (It’s intriguing to note that Alan Jones who did the mastering of the disc is a career undersea acoustician as well as a musician.) Pacing is also central to the piece, stretching out the velocity of activity to a seething crawl and then intensifying it back up to vigorous agitation. The two are careful listeners and while the arc of the piece is a whorl of motion, a sense of transparency is always preserved, allowing the multitude of sonic strata to surface and then submerge back into the mutable mix.

Dave Madden, The Squid's Ear
"Heteropia" gives a word something I'm always trying to describe. A few examples are Cage's Cartridge Music, Lee Patterson's microscopic analysis of burning pine nuts, Günter Müller's three-times-filtered brew of cymbals-through-eight-second-delays, and Tim Olive and various associates' work. Heteropia is not a middle ground between dystopia and utopia but the notion of worlds within a world. These places are self-contained and often have their own language, reality, gravity (or lack thereof), emotional hierarchies, and so on; they can be as simple as a tent, a circus, a submarine, or as complicated as a mirror's reflection (that one still boggles my brain). In the case of Lowering and the above-mentioned examples, the aural localities are without history and representative of themselves, and the listener is coerced into its sonic (mixed in mono) container.
As referenced, Olive has been at the "magnetic pickups" (often with a one/zero-string "guitar") game for a bit; and, through each collaboration, he produces an iteration that is a slight shade dissimilar than the last. Likewise, Montréal-born, Tokyo-based Cal Lyall is an active performer; though less focused on intensified ant footsteps and skronking, he is still steeped in the sound art world via various guitar techniques — some more idiosyncratic than others. Here, the latter opts for multiple underwater microphones (aka hydrophones) to help Olive coax out a placid, understated twenty-seven minutes of music for fishbowls.
Unofficially divided into several blocks, the first chapter begins in a jackhammering of red meter flails. These fade out and reveal a continuous low frequency hum made active with a saturnine shimmer. Dull metallic pings pass over top and are joined with delicate bowing (not sure what is being bowed) that gestates into a layered chorus of harmonics almost ready to burst (meaning get loud); a polyrhythm of clawing (wood, strings) gives the gesture a grounding see-saw. And blam, elision from a snapped spring returns the work to another drone under fidgets and woody rubbing and sawing that realizes as a lion's purr. The duo builds these interdependent pieces from simmer to pause on low boil; vigorous tinkering, a new flavor of electrical chirps, and a looping feedback pulse set in motion stoke the heat back to the level of the introduction. From that, an unnoticed squally mist takes over to grant a few cleansing moments.
After a short intermission, the final eight minutes relish in meditation. Another sympathetic (like a sitar) meditation rocks back and forth while someone occasionally plucks and percussively taps, like gentle, guiding affirmations during a sound bath (it's less New Age than those words).
A criticism of recorded music is that the medium puts the listener in a two-dimensional version of a 3-D world where instruments sound from multiple angles. Lowering would not exist in this context and, in fact, it's closer to putting your ear to a snow globe, or being inside an AM radio receiver.

"Territory can be an elusive thing when sharing musical space. In this way, it's been an interesting recording to make. Where we can often identify ourselves by the spaces we occupy, the map sort of disappeared somewhere along the way. Maybe a pleasantly mysterious wrong turn?"
- Cal Lyall