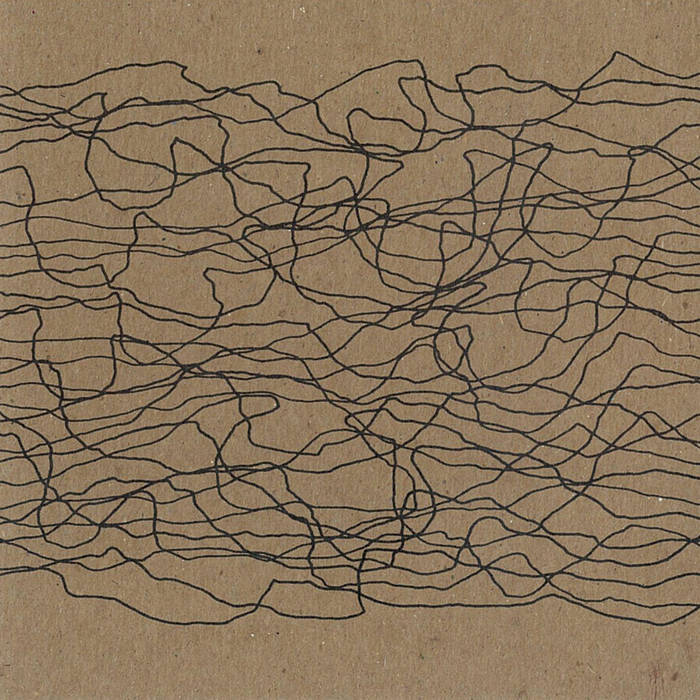 Brian Olewnick, Just Outside:
A thick, rough, spiny set of two pieces, the music elbowing its way through, leaving shavings and unexpected bruises. The first track is quite packed but not overstuffed, several things usually in operation at a given moment–throbbing hums with erratic static and scoured metal here; when a couple of sources drop out, the remaining one or two acquire a ghostly effect, echoing, arguing. One of the impressive things is how varied the landscape is while feeling quite cohesive and of a piece… The sounds range widely, shrill to deep, high to low, though the volume level is fairly consistent, resting in the medium zone and, as said, active without being overly busy. But, for example, when early in the second track, when you hear what sounds like large, hollow metal bars tossed down an empty, linoleum-tiled hallway (which I’m sure is not the actual source), it connotes something more than just the aural sensation, summoning a vague story line, some plot that can’t quite be discerned. It’s magical moments like this (and there are several) that make recordings like “33 bays” so valuable. Don’t let it slip by.

Jesse Goin, Crow With No Mouth:
33 Bays, whose duration does not overstay its ideas nor malinger past necessity, enjoins and rips apart two simpatico improvisers who often sound as if they’re making music from inside a Richard Serra sculpture. The occasional dynamic drops in density and volume are hypostatic, you’ll literally reel and wobble from their effect. This is music that is at once driven (I’ll skirt the meteorological here), and nuanced, and should be heard and huzzahed about alongside stuff like Drumm’s Humid Weather, or Daniel Menche’s Field of Skin.

33 bays was recorded in October 2009 in Kyoto, during a Japan tour by the duo of Tim Olive and Alfredo Costa Monteiro. Recorded live in the studio with no overdubs, the two untitled tracks were chosen from a number of pieces captured over several days, showcasing the duo’s attunement and dramatic sense of structure. Olive (one-string electric guitar) and Costa Monteiro (electro-acoustic devices) produce a rough, feral music with moments of surprising calm and beauty, using basic technology to blast into other realms, dark atmospheres of varying density and great textural variety. Sharp transitions and gradual transformations carry the listener from seeming chaos to ordered spaces pierced by shafts of light.